How Eccentric Was Anna Piaggi? 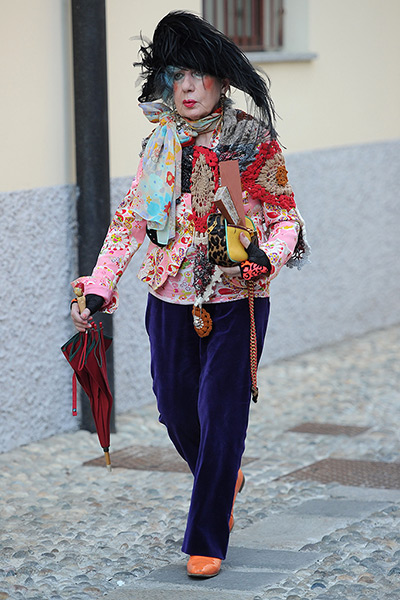 Anna Piaggi, the Italian icon of fashion, died last month aged 81. On Tuesday, The Guardian published her obituary, which described her style as “electrified with eccentricity.” But Anna Piaggi was not eccentric. Anna Piaggi was utterly conventional.

Piaggi’s compatriot, Paolo Virno, describes the conventional mode of living and of working (and, I would add, of thinking) in our times, as virtuosity. For Virno, the lack of an end towards which our activity is oriented (in work and in life), together with the quintessentially public nature of work and of life, the absolute requirement that there be witnesses to our activity, means that we are all now in the mode of performers, active but non-productive, communicative because non-productive, active insofar as we are communicative. In other words, since we no longer typically make things (eg. cars), since we no longer typically do things (eg. eat family meals), all we have are our communications about making things and doing things. To those still in the mode of making and doing things, these communications appear as substitutes and are therefore painful to witness; to such people, communications about making and doing can never substitute for making and doing. But, to those not still in the mode of making and doing (most people in Britain, for example), these communications are glorious, and necessary. Without them, there would be nothing. They are the stuff of our times (not merely substitutes for the lack of stuff in our times). We are all virtuosi, whose activity amounts to occasioning the witnessing of our activity.

And so Piaggi was the most conventional figure of all, one who herded the wearing of clothes, from the 1950s when clothes were still steeped in purposes, through the 60s and beyond, when clothes have come away from all purpose and are worn entirely communicatively. Piaggi “used clothes as theatre,” The Guardian tells us; she was “a great performer.” Piaggi, to use Virno’s term, was a fashion virtuosa, without concern for the ends to which the wearing of clothes has been oriented and, therefore, absolutely in requirement of dazzling a public. Piaggi did not dress to cover herself, to keep warm, to respond to prevailing concerns of her time, to enhance her figure or offend her friends. No wartime “wiggle” here, to make the most of scanty stores of cloth, and, by eschewing excess, to be in sympathy with those in the fight, and to show a full figure to those in need of something for sore eyes. No “New Look” here, to celebrate the end of rationing, and take joy in a new dawn, and return women to near-girlhood following their second great emancipation of the century. Nothing so purposeful. Nothing but the staging of end-less communications. Anna Piaggi dressed to be seen to be dressed. She dressed because she did not dress. She dressed to know she existed. She dressed, therefore she was.

“Spectacle,” in the Situationist sense, is, for Virno, the key to our virtuosic world; the commodification of our capacity for communication is all around, as post-Fordist capitalist societies extract surplus value from “soft” “feminine” “skills” that are still thought of as “priceless” and “personal.” And Piaggi was certainly a spectacle, an instance of the most conventional move of our time, that is, the removal of communications from the contexts in which they might have communicated something, in which they might have made something or done something or been part of something, in order to mummify them as communications in and of themselves. To say it is enough. Because there is now a value merely in saying it. Commodification: that was the business Piaggi was in. She was about as eccentric as a hedge-fund manager.

“Professional play” is how Piaggi described her mode of dress. And she was right. Play may be very serious and involve all kinds of rules (this is not just an anything-goes scenario), but it is without end. Play is not “for” anything other than itself. In all times before these, activity that was not for anything other than itself was, for the most part, consigned to children. But now, grown-ups do it too. In fact, they do nothing else. Anna Piaggi looked like a child who has raided her mother’s wardrobe and daubed on her mother’s make-up. Because Anna Piaggi was a child, just like us all. The question is, when, how, will we ever grow up?