The Curious Tale of Our Loss of Taste 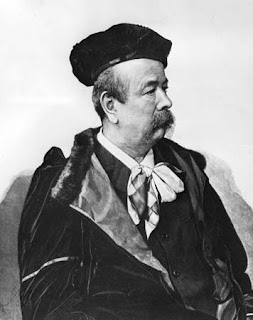 Once established as leading dressmaker of his day, Charles Worth abandoned the conventional attire of the gentleman - at that time, nothing but sombre black suits and tall black hats - for clothes still readily identifiable as those of the artist; he began, in short, to dress like Rembrandt, all beret and bow and flowing velvet lines. In so doing, Worth was both true to, and treacherous of, his vocation as couturier. On the one hand, he was setting himself up as no longer simply a craftsman, albeit of superior technique, but as an artist in his own right, whose work no mere technical skill could account for or reproduce; and he was doing this in the manner he knew best, through a dramatic transformation of his mode of attire. On the other hand, Worth was himself leaving behind the endless play of convention and invention that had come, largely in his hands, to define couture, by adopting a type of dress to transcend the vagaries of fashion and partake of the timelessness that, at that time, was coming to define the existence of art; in this, he coincided with the "aesthetic dress" movement then alive in England, which recommended attire expressive of ageless values to operate as a corrective to the perceived triviality of contemporary dress. (The fact that "aesthetic" dress was characterised by the long flowing lines reminiscent of the clothing of ancient Greece shows that values defended as timeless and true were adopted from the time and place usually resorted to by Western efforts to transcend the changes of humans in history.) Worth, the man of fashion, began to dress in contempt of his trade...

Our Loss of Taste: ...and to function thereby as both orchestrator and sign of an aporia that comes to define his time: between artist and common man; between timeless values and fleeting enthusiasms: between the truly classic cut and arbitrary, transient fashions; and between the faculty of taste and the acquiescence of all those increasingly content to sacrifice theirs in imitation of, or obedience to, an allegedly higher standard. Of his Empress, Eugenie, Worth said in interview: "Not that she is indifferent in the matter of dress. Quite the contrary...The point is that she trusts our judgment rather than her own." If even the Empress relinquished her right to judge what and how she would wear, what hope then for all of her subjects? No, taste was being given up as an achievement of everyday life, and placed in the hands of professionals, the artists whose judgment was more true than yours or mine, by virtue of being more free of the prejudices and purposes, the petty concerns and the small economies, of even an imperial existence. And yet what is it exactly to have taste, if it is not to take from the options before one what appears to be the most fitting, if it is not to reconcile conditions that prevail with hopes for a different future, if it is not to work with the means one has round one and try to produce something better, if it is not, in short, to have everyday thoughts, and everyday means, and everyday things? The freedom so valued in the newfound professional man of taste in fact would remove the conditions for taste; and when the final constraint imposed on Worth's artistry, by what was at least the form of subjection to royal command, was, in 1870, to disappear with the Second Empire, the one in whom good taste had been entrusted had nothing more left him to require it: both the triviality of the high street and the timelessness of high art had come clean away from all mooring, and taste would soon have had its day.
No comments: Links to this post
Newer Posts Older Posts Home
Subscribe to: Posts (Atom)