Not Fit to Wear 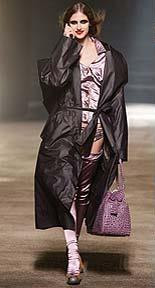 Worth, the first couturier, emerged from the obscure side of the counter at Gagelin of Paris on the strength of his quite startling talent at crafting gowns that fit; the few simple dresses, made by him and worn by his wife, Marie, in order that she might best display whatever hat or shawl a customer wished to see modelled, became themselves the objects of customers' desires, for they fit so well and moved so fine that neither hat nor shawl could outshine their superior cut. And then Worth was suffered to sew, and to refine so the making of dresses that nothing less than a perfect fit was soon considered tolerable by those who could afford the luxury of discernment.

These days, fashion houses no longer demand profitability from couture, which is rather regarded as a symbol of status, speaking in all its excess of the profit that mounts up elsewhere, and successful in this in almost direct proportion to the extent to which the dresses it makes eschew the demands of mere function. This produces the surely very curious category of "Ready to Wear": curious because it contrasts, not with designs that wait to be tailored to personal fit but with garments not fit to be worn.

What began as the work of refining a craft so that dresses would fit wearers well, is now all defined by a grand scale contempt of such mundane requirements as dressing in clothes that are cut for the purpose.